I just realized how long I've let my LJ languish. Most of my social media usage moved to G+, and now a bit is on FB because it's cross posted from my daily drawing blog.

Speaking of! That's what I've been doing instead of posting here: drawing something every day and posting it at http://smidgeonink.tumblr.com/tagged/daily-drawing. There's a few other things not under the daily drawing tag, but mainly, that's what's been forcing me to wake up and get out of bed these days. (I mean, besides getting the kinder off to school.) I'm including a sample of what I'm on about here:

It remains to be seen if I'll get back into the habit of posting here. I really fell off after the wretchedness of Fall 2012, and couldn't bring myself to write anything. Well, anything that wasn't self-indulgent depressive twaddle, anyway.

This is a little something I whipped up while sitting with

annys_wolf and watching a BBC miniseries of Pride and Prejudice from 1980.Yeah, this image does include a worm in a scarf who can see its breath. WHAT. 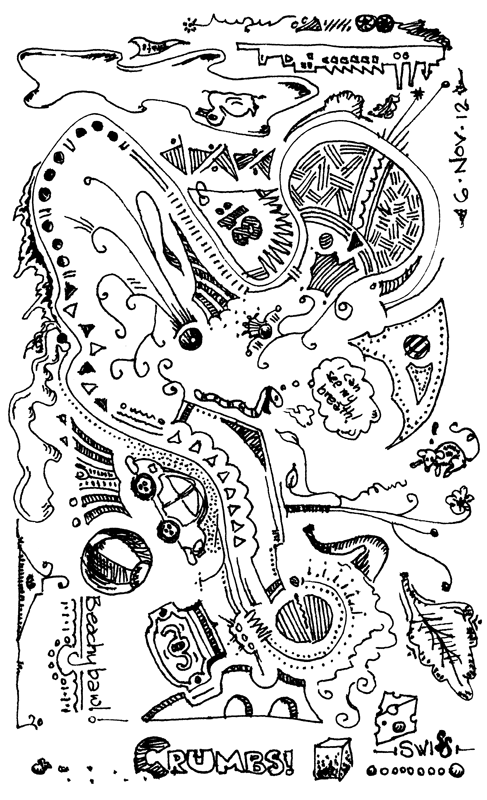 Art things! (Cross-posted from G+, because I think there are some gaps in the overlap. Also, I've been very aware that I've let my LJ languish.)

I've decided the New Pen is a keeper. :)

Yesterday I stepped up to the drawing board to see what it could do, and came up with this, "Winter Berries". I'm dead chuffed with the tiny little marks! With more practice, and as the nib breaks in, I should be able to get tight little marks as well as more of the lovely thick-thin variation seen in the frame.

I've turned this piece into a greeting card at my zazzle store. If you're looking for cards for the holiday season that aren't super-sappy, speak of the season itself, and support someone you know, please consider these! A nice detail: you can mix and match and still get a reduced price, because Zazzle's bulk discount kicks in not only if you order multiples of one design, but also, say, with 5 of one and 37 of the other.

Overheard at the train station: "...yeah, I got a new court date. And they changed my bail. Yeah, they changed my bail requirements." The woman saying this said it in the same tone you'd expect to hear used for "Well, I'll be in in a bit, gotta go, the train's pulling in."

I feel uncomfortable sharing any phone call on a train or platform, let alone letting everyone around me know I'm in a situation where I need bail arrangements. Diff'rent strokes for diff'rent folks, I guess.

Posted via LiveJournal app for iPhone.

This sort of counts as Randomousness, I guess. :)

Playing with a new iPad drawing app, the one which Wacom markets for the stylus that they sell. (PS: It's quite a nice stylus. The barrel is pen-sized, and the rubber bulb is smaller than pretty much every other rubber-bulb stylus out there, so it offers better drawing control.) The app is Bamboo Paper, and the sketch ("Seaside Girl") was freehanded on a moving train. :)

I have been remiss! Or out of practice, hard to say which.

It's been so long since I regularly posted here, that I forgot to post that my lovely wife has been updating her blog about her Zimbabwe trip, over at http://hopeallysondwiggins.com/.

Hm, forgot to cross-post this.

There's two new items over at my project blog, two scrolls which went out this past weekend at Mudthaw. I can post this now that I'm sure that happened. :)http://smidgeonink.com/made_stuff/

I was in a parking lot of a business attached to a hotel, at an intersection I vividly recall knowing well, but damned if I can remember it now. I was working on something... Cleaning out my car? What I did for work? Regardless, I could suddenly hear, in my head, the voice of a child trying to convince a sibling and whoever was driving that he could hear a ghost talking. And that it was nearby, and he wanted them to stop so he could listen to it. What was weird was that I couldn't hear the rest of the conversation, I could only... sense the child's reaction to what was said, but I knew they weren't making themselves clear or selling their story very well. It seemed like they were in slow-moving traffic, or at a really long stoplight, because I could clearly hear this for a while, and get a sense of rising frustration, as well as more and more of the sensation of the rest of the conversation - it was like the child was so sure of his conviction, of what he heard (in the dream I kept thinking it was a he, but was never sure) that he was broadcasting his thoughts to whoever was able to receive them.

Eventually, I was so intrigued that I got in my car and started to drive around the area to see if could locate them, to no avail. I tried to grab a pen or marker to write down the salient points so I'd remember, but for some reason, I couldn't get just one out of the huge zip-lock bag on m passenger seat (?). Eventually, still driving, I got one marker out, but it was white, and wouldn't write well on my arm. Which I recall being foam rubber... which in turn makes me think I might have been a muppet. in the dream. I pulled over, into the hotel parking lot on the other side of the block from where I started, to get a different marker (maroon, I think) and write down everything I could remember (on my arm, still) until what I was hearing dissolved into a quiet jumble, as they perhaps drove out broadcast range. At the end, I got the strong impression of the adult (or adults) trying to change the subject on the kid, and talk about a sport or activity which eventually put _me_ in mind of swimming, so I went to friend or relative's house and went swimming (either I wasn't working like I think I was, or hey - f@ck work).

1. While at the pool, I came up with a comedy routine involving asking a dolphin how to keep water out of my scuba mask ("what's a mask?", the dolphin would ask me) which was hilarious, and only lends credence to the "I might have been a muppet" theory. Also, because it was a dream, the dolphin started as a remote control pool toy, and became a real, albeit miniature, dolphin, capable of living in chlorinated pool water. That it could talk was only part of the comedy routine. :)

2. I wonder if the "ghost" that the child could hear was my thoughts, broadcast in a similar fashion, but I don't remember thinking anything so strongly that I would broadcast it. It also could have been someone else's thoughts, or a real ghost. I do remember that, although an adult myself, I didn't think it far-fetched that there was a ghost, and spent a lot of the time trying to think where in the area the ghost was for the kid to hear it.

So this marks the first time I can remember a dream because I wrote it down in the dream, on my own arm, in maroon felt-tip marker.

Posted via LiveJournal app for iPhone.

Oh beware, my lord, of jealousy!
It is the green-eyed monster which doth mock
The ianraven it feeds on.

Which work of Shakespeare was the original quote from?

I love my wife dearly, but we have differing ideas of what's "funny" (my definition is waaaaaay more inclusive than hers). I, for example, found Space Ghost Coast-to-Coast fall-of-the-sofa hilarious, and she would sit and ask me why I found any of it remotely amusing. Through my gasping and tears I would be forced to admit that I had no idea why it was funny... but it was. Sometimes, though, she is the funniest person I know. Sometimes, our humor meshes and we will go off on a funny and nonsensical tangent that has no equal.

One of these conversations produced the Biblical stricture that you "shall not lie with a lobster as you would your wife". Another, the one from the other night around 1:45, gave birth to Turtle® brand Sloth Bacon.

You see, turtles are natural predators of three-toed sloths… because (I figure) they need a prey slower than them. The first thing a turtle will try is to run full speed into the trunk of a tree to try and shake loose a sloth. (… … … … bonk) Assuming that this does not work, the turtles resort to lighting a fire under the sloth, and smoking/slow-cooking it while it's still in the tree. Producing sloth-bacon, the ultimate slow food. Mmm-mm.

There's a logo. Because it's what I do. (Also, It was a great way to test-drive my brand new sketch book!)